Research activities started immediately after lunch onboard. A CTD (conductivity, temperature, and depth sensor for seawater), and two sampling nets (multinet and WB3) provided the first insight into the environmental and biological characteristics of the ocean outside the sheltered continental area. The first crate sent from the Scottish Association for Marine Science (SAMS) was opened, and it was like Christmas all over again.

The Arctic ABC technology team (the A in ABC) did not waste any time and setup a mini electronics lab in the instruments room onboard to begin testing the ICE-POPES (electronic sampling devices, which stands for Ice-tethered Platform Cluster for Optical, Physical, and Ecological Sensors, so not the Catholic kind) that will be deployed at Ny Ålesund in Svalbard. We hope that you can appreciate the looks on everyone’s faces–the engineers in charge were happy to see not only that the equipment made it, but that their tools and spare parts were right where they were supposed to be. 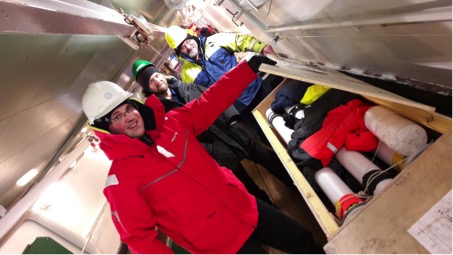 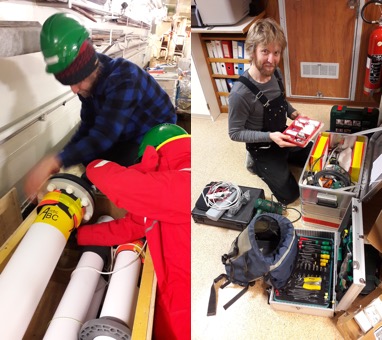 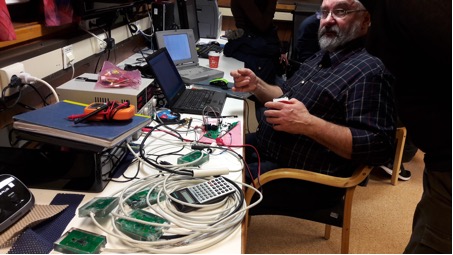 The ‘A‘ in Arctic ABC stands for applied technology. Scientists have developed and will be deploying autonomous drifting sensors in the Arctic sea ice. These sensors will observe and monitor the ice-associated biological communities during the winter (polar night) and spring seasons. Data collected from these sensors will provide a better understanding of how Arctic biological communities will respond to climate change.

In January, the Arctic ABC team will be installing sensors in Ny Ålesund, Svalbard (situated at 78° 55′ N, 11° 56′ E). Artur Zolich and Sturla Haltbakk, researchers from NTNU (Norwegian University of Science and Technology) are working with instruments that measure light throughout the year. The data that is harvested from these sensor instruments will be complimentary to the underwater measurements of light for the instruments that will be tested later on in January. Stay tuned!

What is the Arctic ABC project about? Watch the video below to learn more.