Warning: exec() has been disabled for security reasons in /customers/f/8/9/mare-incognitum.no/httpd.www/abcblog2017/wp-content/plugins/open-beacon-mp4-conversion-and-compression/includes/ob-mp4-cc-assistant.php on line 44 Ship activities – Polar Night Cruise 2017
Skip to content

The last day of our cruise we headed south back to Longyearbyen. It was a pretty rough ride, with seas at 8 meters and winds over 30 meters/second! But we all arrived in Longyearbyen safe and sound–back to labeling (and lots of packing up)!

Malin Daase made two amazing time-lapse videos! The first one is of the fish crew sorting trawls. We hope you can gain a certain appreciation for identifying and sorting the different species we find in the pelagic trawls. There is something truly satisfying watching things get organized and tasks being achieved! Additionally in Kongsfjord, we caught a lot of Atlantic cod–which means we eat them (why waste good fish?) after a subsample of them are weighed and measured. You can watch how fast fish are filleted onboard–though to be fair to the student, you learn by doing!

The second video is an overview of the different nets that we used during the cruise (the MIK net and the MultiNet). We talked about these different nets and why we use them, but if you can’t remember, just take a look back at our previous posts.

Thanks to Malin for these videos, and we hope you like watching them as much as we do. Enjoy! 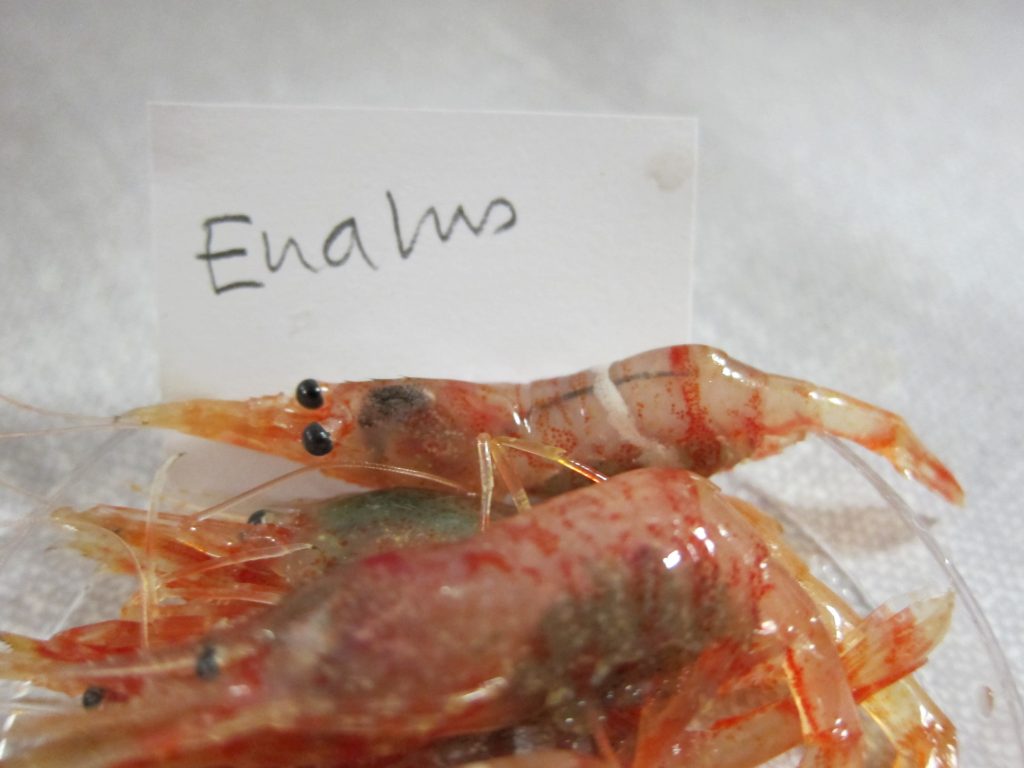 January 11th, 2017, “Max transect”, we finally made it up “north”. This year, the fish team also worked with a project conducted by Post-doc Maxime Geoffroy that aims to relate the content of pelagic trawls with acoustic measurements. The purpose of this is to monitor the seasonal position of the back-scatter layer in the water column and to document what it is composed of (mostly mesopelagic fish and krill as we’ve noted in our trawls). This project required us to perform MIK nets and pelagic trawls on the “Max transect” north of Svalbard. The sampling plan and transect position were changed slightly due to bad weather but we managed to get most of what we initially came here for, which was very satisfying. The trawls we conducted north of Svalbard contained very few polar cod but an impressive number of Sebastes sp. and Themisto libellula, a typically Arctic amphipod that polar cod feed on extensively.

Throughout the cruise, we sampled opportunistically for a number of other projects, namely a project looking at capelin otoliths, another one looking at “anything that is rare and ugly – just like Carl”, we helped Erin with her attempt to gather ice associated amphipod north of Svalbard, and collected specimen for undergraduate courses back at UiT for Bodil and UNIS for Janne.

January 9th 2017, Kongsfjorden, the hunt started once again. On a cruise like this one, most of us biologists are looking for specific critters. As it stands, it has almost become a tradition for the fish group to be on the lookout for polar cod. This endemic Arctic species is the most abundant cryopelagic fish at high latitudes and is believed to play an important role in the Arctic marine food web. In recent years, polar cod have not been doing so well on the west coast of Svalbard, and the increasingly warm Atlantic water seems to have displaced them for reasons that remain to be understood. This displacement might be explained by a change in prey or an increase in competition and predation due to the northward expansion of boreal fish, such as Atlantic cod. Because of this, and as I’ve mentioned it in the past, it has become increasingly difficult to find the little fellows on the west coast of Svalbard, and instead of a catch typically composed of Arctic species, ours are now most often composed of boreal species (whether it be fish or invertebrates). Because it lacks a sill, Kongsfjorden is particularly influenced by Atlantic advection and our trawls there testified this. They did contain some rare polar cod along with the more typically boreal Altantic cod, haddock, and capelin. Part of the goal of the polar cod project that is conducted by PhD student Morgan Bender is to document how these different water masses (Arctic versus Atlantic) affect polar cod reproduction and diet. To do so, we’ve been monitoring seasonally and annually their lengths, weight, body condition index, hepato- and gonado- somatic index, and their diet. To this, we’ve added in 2017 blood samples, histology measurements, and otoliths reading.

For this project, the ideal is to obtain polar cod of different size categories from Atlantic and Arctic fjords using both pelagic and demersal trawls. As previously mentioned however, finding polar cod in Atlantic fjords resembles a hide and seek hunt and can be quite frustrating. We did manage to find what we were looking for but we did not get a large sample size until we deployed the trawls in the north eastern part of Svalbard, in Rijpfjorden (nearly 600 specimen were caught in one trawl).

Throughout the cruise, we have cast a lot of CTD’s. CTD stands for conductivity (or salinity), temperature, and depth. In oceanography, a CTD is a regularly used instrument that is dropped vertically in the water column to measure water properties (the C, T, and D) at different depths. CTD’s are usually attached to large bottles that collect sea water at different depths. In the video below, the crew brings up the CTD rosette, and Martí and Peter begin filtering water.

Why do we need to know the properties of ocean water? To learn more about where certain animals live in the ocean, we use instruments like CTD’s to determine different water properties at various depths. We can then use this type of data and correlate it to the type of animlas or plants we find there, and further study how tiny marine critters can survive in different areas (or habitats) of the ocean.

Phytoplankton (tiny ocean plants) are essential for many marine animals. By filtering sea water, we can collect these small plants (as well as dead organic material) on filters with microscopic holes. Therefore, filtering water can give an indication of the amount of food available to small marine life (as Coralie mentioned in her post). Martí filters water for his project to learn more about the microbial food web during the polar night.

CTD data can also be used to compare water properties at similar locations through time. The water in western Svalbard is influenced by warmer and saltier water from the Atlantic Ocean moving its way northward into the Arctic Ocean. To determine if some of the fjords in western Svalbard will be ice-covered this year, researchers can investigate water temperatures using a CTD (see figure below). Some of the researchers on our cruise have summarized their findings on this University Centre in Svalbard (UNIS) page.

In addition to conducting the animal activity experiments with Kim Last, Jon Cohen is also conducting respiration experiments onboard. Watch the videos below to learn more about his work.

We will also have more posts from the fish crew, but here are some photos of the fish crew and what kind of organisms they are finding up north.

We are the northernmost people in the world (or we would like to think so)!