Our readers my have lost track of the activities of the ArcticABC tech team that went off Helmer Hanssen in Ny Ålesund on January 9th. We account for that gap with this entry. The expedition in this scientific station was an opportunity to test the newly developed instruments for the project that will be deployed in the North Pole ice this year. Additionally, it was the learning ground for the UNIS course on applied marine robotics with 20 international and multidisciplinary students.

Immediately after arrival, the Arctic ABC tech team took control of the room baptized as “the Vatican” because that is where the POPEs were being developed (UiT The Arctic University of Norway’s Ice- tethered Platform cluster for Optical, Physical and Ecological sensors or ICE-POPEs). Bernard, Shane and Artur worked intense hours tweaking the circuits, coding the capacity of the instruments, shaping the material to fit the computers, batteries and ballast and getting the units ready for testing. Sonars, super sensitive cameras, and other equipment were successfully connected and proved that their ideas could be taken into reality. The first successful tests of an ArcticABC ICE-POPE happened in the darkness of the winter and was illuminated with the rays of the full moon in the middle of Kongsfjørden on a flat wind day (or night, depending on what parameters you take it into account). The engineering team worked hard and deployed instruments in both calm and full storm days, gathered data and analyzed it in an environment that allowed high concentration levels: the scientific station of Kings Bay during the polar night.

Parallel to testing, the course gathered experts from UiT, UNIS and NTNU in the field of marine applied technology. During 12 days, the students learned how to use different marine vehicles, like AUVs, ROVs, and ASVs, and equip them with instruments that could enable them to see or hear what lies beneath the surface, where it is practically impossible for us to be in. Prof. Jørgen Berge and Geir Johnsen orchestrated the event and the three groups of students (segregated by vehicle use) had a hands-on experience. Maxime, Daniel and Pedro installed all acoustic instruments we had with us in the Jetyak, a remotely controlled boat, or in the newly acquired and tested Polar Cirkel. This latter proved to be a superb platform for scientific activities. Professors Maarja and Martin showed us how the bottom of the sea looked with a remotely controlled camera while Petter and Asgeir, supported by Trygve and Øystein, enlightened us in the use of the robotic submarines, aka LAUVs. But science at Ny Ålesund was not limited to the marine environment.

Our appreciated readers might recall that at Longyearbyen, Daniel and Minna-Liina went on board the R/V Helmer Hanssen. The high capacity of Daniel to coordinate activities and vast knowledge of where things are in Svalbard were of utmost help for the whole operation. However, we have not described yet Minna-Linna’s role in the project. She is a human geographer and was studying how the ArcticABC project works and generates knowledge. Among other things she is interested in is understanding how the group members interact and communicate. Impressively, her research takes her to places like the Arctic but also to more tropical environments like Zanzibar. The expedition itself provided valuable material for her research and she therefore became one with the scientific team of the ArcticABC.

The expedition was energetically demanding for everybody, precisely timed, densely organized, with lots of personal learning and a successful experience. The pictures provided show the deployment of the Jetyak, by the students, with an echosounder mounted underneath. It also shows some of the tech team holding what will become POPE3, which will be used for acoustic research of fish and plankton under the ice. The team is now back at home and getting ready for the next expedition at the end of February. This will be the first deployment in-situ of our technology. 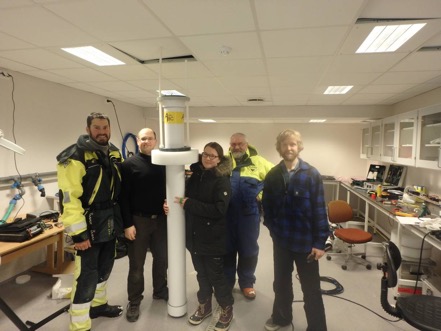 On 9 January, we stopped in Ny Ålesund to drop off gear and researchers, before we pushed northward (well first to Krossfjorden, then northward).

Part of the work we will conduct with the technical team of ArcticABC in Ny-Ålesund is to test acoustic instruments, in particular Acoustic Zooplankton and Fish Profilers (AZFPs). Two AZFPs will eventually be deployed on ICE-POPE 3 (Ice-Tethered Platform Cluster for Optical, Physical, and Ecological Sensors), one looking upward and the other downward, to study both zooplankton and fish under ice but also at greater depths in the water column (see attached figure). Before we install these instruments on the autonomous ICE-POPE and leave them operating in the Arctic for several months, we need to test the different settings we are planning to use and make sure they allow 1) a good enough resolution to detect small organisms near the ice cover; and 2) low energy consumption that enables data collection over a complete year cycle on the same battery pack.

As the weather calms down around the cruising path of the R/V Helmer Hanssen, Max prepares to operate the new Kongsberg echosounder. This is a wide band acoustic transducer EK80. What is unique and novel about it is that it chirps (which is like whistling for brief periods), instead of pinging (which is similar to honking on a car). Together with the AZFP (stands for Acoustics, Zooplankton, and Fish Profiler) echosounder from the ASL Environment Company, both echosounders will tell the team where the plankton and fish are located in the waters outside of the Ny Ålesund research station. Before that happens, the Arctic ABC team needs to know how to operate it, test that all its cables and connections are working, and come up with a plan on how best to install both instruments in the water.

The ‘A‘ in Arctic ABC stands for applied technology. Scientists have developed and will be deploying autonomous drifting sensors in the Arctic sea ice. These sensors will observe and monitor the ice-associated biological communities during the winter (polar night) and spring seasons. Data collected from these sensors will provide a better understanding of how Arctic biological communities will respond to climate change.

In January, the Arctic ABC team will be installing sensors in Ny Ålesund, Svalbard (situated at 78° 55′ N, 11° 56′ E). Artur Zolich and Sturla Haltbakk, researchers from NTNU (Norwegian University of Science and Technology) are working with instruments that measure light throughout the year. The data that is harvested from these sensor instruments will be complimentary to the underwater measurements of light for the instruments that will be tested later on in January. Stay tuned!